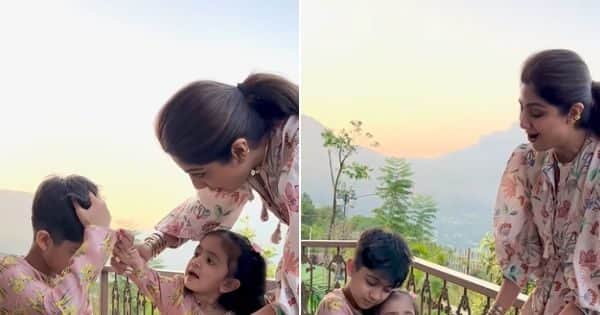 Shilpa Shetty Video: Shilpa Shetty’s children Viaan Kundra and Shamisha celebrated the festival of Bhai Dooj with great love. The video related to this has been shared by the actress on Instagram account, which fans are also very fond of. The cuteness of Shilpa Shetty’s daughter in the video has won the hearts of people.


Shilpa Shetty (Shilpa Shetty) In the video, daughter Shamisha was seen telling all the rituals of Bhai Dooj. The actress first performed Viaan’s aarti at the hands of her daughter, after which she tied Kalava, got tika and also fed Laddu to Viaan at the hands of Shamisha. Soon after giving the laddoo to Viaan, Shamisha lovingly asked her mother Shilpa Shetty, “Can I have this laddoo.” Shilpa Shetty laughed at her cuteness and said, “Yes, absolutely must have.” Sharing this video, Shilpa Shetty wrote, “Bhai-sister ki yari, hotest hai hai.”

Riddhima Kapoor Sahni and Shamita Shetty reacted by sharing a heart emoji on Shilpa Shetty’s children’s video. At the same time, users also showered love on the video. Reacting to Shamisha’s cuteness, a user wrote, “It was so cute. She said with so much love that I can take it.” Another user wrote, “Hey man, this is so cute.” Apart from this, many fans commented and congratulated Shilpa Shetty for Bhai Dooj.