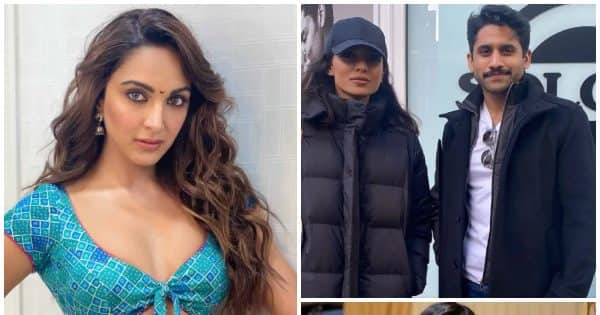 South Gossips Today: In the world of South cinema, many news went viral on social media throughout the day. The news of banning actress Rashmika Mandanna in the Kannada film industry came to the fore. So right there, actress Kiara Advani’s desi look from the shooting set of RC 15 went viral. Read today’s 5 big movies of South Cinema.

South Gossips Today: On 25 November 2022, many news about South Cinema dominated the social media. In this special report, we are going to tell about 5 big viral South Cinema news of the day. Today, throughout the day, where a picture of actress Kiara Advani and Ram Charan caught the attention of the fans. So right there, after this a picture of a desi look came out from the shooting set of the actress’ film RC 15. At the same time, the news of banning actress Rashmika Mandanna has come to the fore in the Kannada film industry. Whereas, Allu Arjun is reported to have reached Russia for the Russia screening of Pushpa. Read here 5 big news stories that went viral throughout the day. Also Read – Kartik Aaryan made a big disclosure about his marriage, said- ‘Three to four years…’

Actress Kiara Advani and film star Ram Charan are busy shooting for their film RC 15 in New Zealand these days. Where the latest picture of actress Rashmika Mandanna from the shooting set of this film of director Shankar blew the senses of the fans. In this picture, the fans got convinced seeing the desi avatar of the actress. This picture was fiercely leaked on social media.

Rashmika Mandanna will be banned in Kannada cinema

A picture of Samantha Ruth Prabhu’s ex-husband Naga Chaitanya went viral today. In this picture, the film star was seen celebrating vacation with his rumored girlfriend Sobhita Dhulipala. After seeing this picture, many people called it fake. So Samantha’s fans were furious to see her roaming around with her rumored girlfriend leaving her in trouble.

An interesting information has come to light about Tamil film star Priyamani Raj aka Suchi of The Family Man. It is reported that the actress will once again dance with superstar Shah Rukh Khan in his film Jawan. Also Read – Not only Varun Dhawan, these stars also revealed the secrets of dating stars, the world was stunned

Allu Arjun will go to Russia for the screening of Pushpa

Superstar Allu Arjun is in discussion these days about his film Pushpa. The film is now going to be screened in the overseas market Russia. There is news that for this Allu Arjun himself will promote the film by going to Russia.

Thalapathy Vijay’s 67th film rights sold for so many crores

Here, interesting information has come to the fore regarding Tamil superstar Thalapathy Vijay’s 67th film. If media reports are to be believed, the rights of this film have been sold by the makers for Rs 240 crores. This includes the amount for the digital and satellite rights of the film.