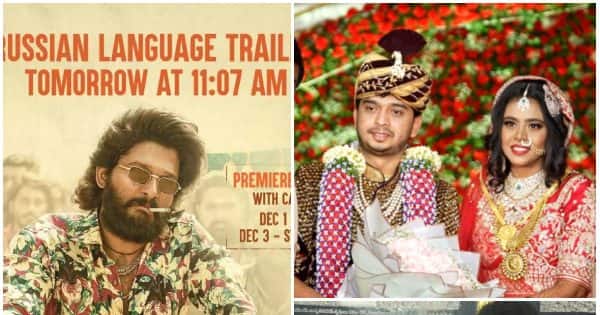 South Gossips Today: An interesting information has come to light regarding the release date of South Superstar Allu Arjun’s film Pushpa. At the same time, Dhansu’s next film Dhansu has been announced. Read here 5 big news of South Cinema.

South Gossips Today: On the day of 28 November, many news of South Cinematic stars were in headlines. The news of these film stars dominated the social media. The link-up news of superstars Prabhas and Kriti Sanon created a ruckus on social media throughout the day. At the same time, the mega announcement of Dhanush’s next film took place today. Here, there was a gathering of film stars at the wedding of Tollywood star Ali’s daughter. Many of whose pictures went viral on social media. Learn here 5 big news stories of South Cinematic stars. Also Read – Top 5 South Photos of the Week: Mahesh Babu returns to shooting, Hansika Motwani’s wedding rituals rock

Pushpa will release in Russia on this day

The grand wedding of Fatima, daughter of Tollywood film star Ali, took place in Hyderabad last day. Where many South film stars participated in the marriage of the film star’s daughter. Where many film stars including Chiranjeevi to Nagarjuna attended. Also Read – Pushpa 2 Movie: Allu Arjun will clash with Salman Khan’s enemy, loud whistles will echo in theaters

south film star Samantha Ruth Prabhu A good news has come about. There is news about the film star that the actress has recovered from her illness. Now she will soon resume the shooting of her next film Kushi, starring Vijay Deverakonda.

Mega announcement of Dhanush’s next film

Tollywood film star Dhanush and director Shekhar Kammula have joined hands once again. This will be a pan India release film of film stars Dhanush and Shekhar Kammula. The makers will release the film in multiple languages ​​including Tamil, Telugu and Hindi.

Kriti Sanon and Prabhas to get engaged soon?