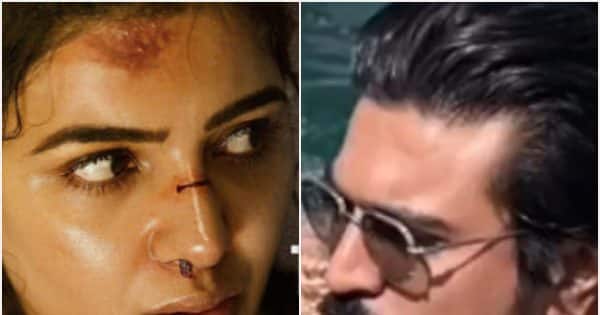 Top 5 South Gossips Today: The news of the South Cinematic world created a ruckus on social media throughout the day today. These news dominated the world of social media throughout the day. Today, a video surfaced of superstar Ram Charan enjoying in the pool from the sets of his film RC 15. So at the same time, there was talk of building a memorial in Hyderabad in memory of Krishna, the father of superstar Mahesh Babu. Apart from this, the excellent earnings figures of Yashoda, a film by South actress Samantha Ruth Prabhu, have also come to the fore. Read here these 5 big news of South Cinema which were in headlines throughout the day. Also Read – South Gossips Today: Ram Charan dances with Akshay Kumar, Allu Arjun’s Pushpa 2 will release on this day

RRR star Ram Charan is busy with his next film RC 15. Director Shankar is making this film. A cute video of Ram Charan surfaced today from the shooting schedule of the film. Which attracted people’s attention throughout the day. In this video, superstar Ram Charan was seen enjoying in the pool.

Samantha’s Yashoda earned this much on the sixth day

Here, actress Samantha Ruth Prabhu’s film Yashoda is busy earning a bang. 6 days have been completed since the release of the film. However, the film now slowly seems to be losing the love of the audience. The film has so far earned a total of Rs 22.45 crore at the worldwide level in 6 days. Also Read – These South film stars were supercute in childhood, you will not be able to recognize by looking at the photos !!

The ED has sent a summons to the producer-director of Liger film Puri Jagannadh and Charmy Kaur. According to the information received, ED has issued this notice on Puri Jagannadh and Charmy Kaur in the case of violation of FEMA. The ED suspects foreign investment in the making of the film Liger. Because of which this notice has been sent to him. This is just preliminary information. We await more inputs on this.

Tollywood superstar Mahesh Babu’s father Krishna passed away yesterday at the age of 80. There are reports that superstar Mahesh Babu, who is devastated by the death of his father, is now preparing to build a memorial in his memory. Which will be made in Hyderabad only. Also Read – South Gossips of the Day: Ram Charan’s photo with Akshay Kumar went viral, Samantha celebrated by eating Jalebi

It is reported that film star Arjun Rampal is going to be seen in Nandamuri Balakrishna’s next film. If reports are to be believed, Arjun Rampal will play the role of a villain in this film. However, it has not been officially announced yet. But it has been heard that the film director has narrated the script to Arjun Rampal and he has also liked his character.