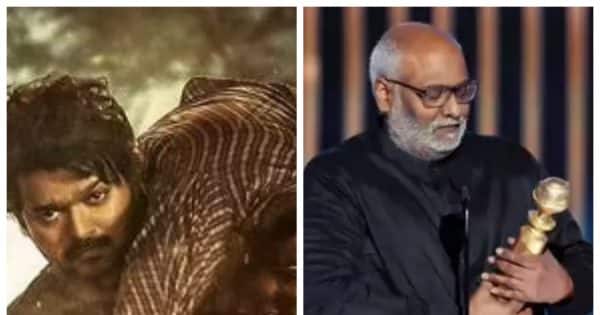 Top 5 South Gossips Today: There was a stir in the South Cinematic world today due to many news throughout the day. Most of the discussion was about director SS Rajamouli’s film RRR. The film created history by winning the Best Original Song category at the Golden Globe Awards 2023 for its song Naatu Naatu. Whereas, Tamil superstar and Telugu superstar Ajith Kumar and Thalapathy Vijay’s films reached the box office. Here, KGF star Anant Nag slammed Pathan’s song Besharam Rang. Here’s a look at the headlines throughout the day. 5 big news of South Cinematic world. Also Read – Golden Globe Awards 2023: Ram Charan became romantic with pregnant wife Upasana on the red carpet, photos went viral

11 January 2023 will be very special for Indian cinema. Today, the song Natu-Natu from South film director SS Rajamouli’s film RRR won the Golden Globe Award, raising the name of Indian cinema at the international level. This song of the film has been awarded in the Best Original Song category.

Thalapathy Vijay’s Varisu to release in Hindi as well

Here, Tamil superstar Thalapathy Vijay’s film Varisu has finally reached the theatres. The interesting thing is that along with this the makers have announced the Hindi release of the film. The film is scheduled to release in Hindi cinemas on January 13. Also Read – Jr NTR gave a gift to this special person on the red carpet at Golden Globe Awards 2023 Night, video going viral

KGF star Anant Nag in a recent interview raised questions on the song Besharam Rang from Bollywood superstar Shah Rukh Khan’s film Pathan. Also, he fiercely criticized the bold scene depicted in this song. The film star said that this nudity should stop. This is not Indianism.

It is reported that actress Srinidhi Shetty, who became a big star overnight from the film KGF, has got her first Telugu film. If media reports are to be believed then Srinidhi Shetty can be seen in Venkatesh Daggubati’s next film.