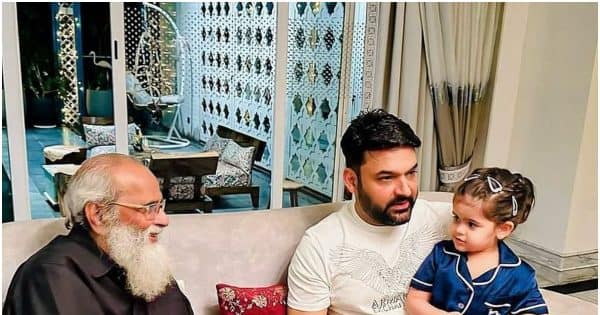 Kapil Sharma SS Rajamouli Sharing pictures of this meeting with V Vijendra Prasad’s father on Instagram, wrote, ‘Spending time with Legendary Mr. V Vijendra Prasad was nothing less than an honour. Member of Rajya Sabha and writer of classic films like Baahubali, RRR and Makkhi… a very humble and brilliant human being. Learned a lot from you sir. Lots of love and respect forever. Kapil Sharma You can see this lovely post here. Also Read – SS Rajamouli’s film RRR’s entry in Oscars 2023, fans of Ram Charan-Junior NTR will rejoice

These pictures have caught the attention of the fans as soon as they surfaced. After this meeting with V Vijendra Prasad, people are speculating that he will soon be seen in Kapil Sharma’s comedy show The Kapil Sharma Show? So right there, some people’s eyes were fixed on Kapil Sharma’s luxurious house. The luxurious house of comedy star Kapil Sharma is visible in the background of these pictures. Whose pictures are now becoming increasingly viral among fans. Also Read – RRR: Ram Charan-Junior NTR’s film created history, got three awards together