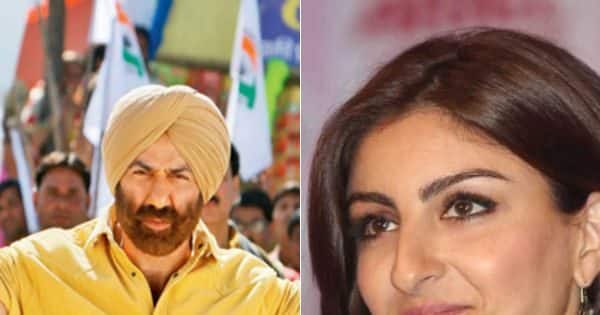 Soha Ali Khan slapped Sunny Deol: Bollywood’s famous actor Sunny Deol has made a lot of recognition with his films and his style. In films, Sunny Deol is often seen washing the villain. but in real life Sunny Deol (Sunny Deol) is a person of equally calm nature. Apart from this, hardly anyone would know this story related to him that once after getting upset with Sunny Deol, Soha Ali Khan (Soha Ali Khan) had slapped him hard. Even the people present there were surprised by this slap on Sunny Deol. Also Read – Some Bollywood stars were hits and some flops in the field of politics, Amitabh Bachchan left the party after winning the election

Sunny Deol And this issue related to Soha Ali Khan is related to the set of the film ‘Ghayal: Once Again’. Actually, Soha Ali Khan played the role of a psychiatrist in the film. He has to handle Sunny Deol in a scene. To bring him back to his senses, the actress has to slap him. But getting lost in the character, Soha Ali Khan slapped him a bit too fast. Also Read – These Bollywood stars use wigs, had to be embarrassed on many occasions due to lack of hair !!

Soha Ali Khan And this thing related to Sunny Deol was also disclosed by his source. Talking to Deccan Chronicle, Sunny and Soha’s source had told, “Sunny lost his temper in a sequence of the film. In such a situation, the actress had to slap to bring him to senses. She was too lost in the character. She didn’t realize it and slapped Sunny too hard. Soha herself was shocked by this and the ground slipped under everyone else’s feet.” Also Read – Blockbuster is the pair of these actors-directors of Bollywood, together they have set the silver screen on fire many times

Sunny Deol as such is a very calm person in real life. In such a situation, understanding the situation of Soha Ali Khan, he ignored her. Also did not give any reaction on this matter.