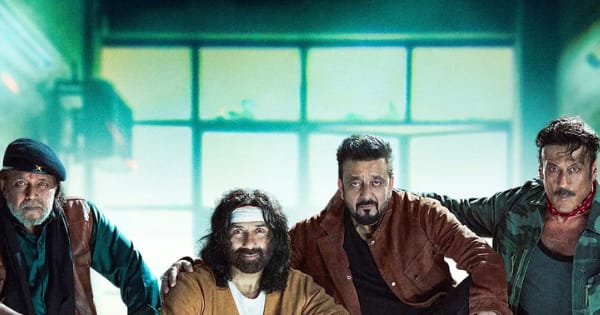 Baap Of All Films Stars First Look: Jackie Shroff, Sunny Deol, Sanjay Dutt and Mithun Chakraborty’s first look from ‘Baap of All Films’ is out. Everyone’s look is different from Sunny Deol.

Baap Of All Films Stars First Look: Well-known Bollywood star Jackie Shroff is in the news these days about his film Phone Bhoot. This film of Jackie Shroff has not been able to do much wonders at the box office. But people have liked the look shown in the film Jackie Shroff. For information, let us tell you that apart from Jackie Shroff, Katrina Kaif, Ishaan Khatter and Siddhant Chaturvedi are also seen in the lead role in this film. Meanwhile, Jackie Shroff has shared a post with the Instagram handle, after seeing which the fans are looking very happy.

Jackie Shroff’s ‘Baap of All Films’ is once again in the limelight. Jackie Shroff has shared a picture related to the star cast of this film. Which fans are very much liked. Jackie Shroff has shared the first look of himself and the rest of the stars from ‘Baap of All Films’. Along with him in the picture he shared Sunny Deol, Sanjay Dutt And Mithun Chakraborty is seen. Sunny Deol’s look looks completely different in this photo. After seeing which people are not even able to recognize them. This picture shared by Jackie Shroff is becoming fiercely viral on social media. For information, let us tell you that Deol, Sanjay Dutt, Mithun Chakraborty and Jackie Shroff are going to be seen together in the movie ‘Baap of All Films’. The action avatar of these actors will be seen in this film. (Also read: Fans want to see these Bollywood celebs taking 7 rounds as soon as possible,

People made these comments