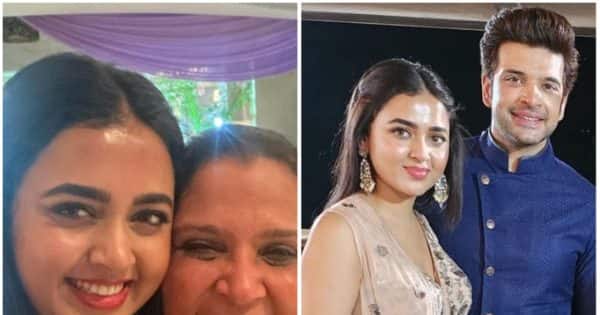 Tejasswi prakash with karan kundrra: Some pictures of Bigg Boss 15 winner Tejashwi Prakash and Karan Kundrra have surfaced, in which both are seen making a splash at their friend’s wedding.

Tejasswi Prakash Photos: Actress Tejashwi Prakash, who won the trophy of Bigg Boss 15, is everywhere these days. The actress is dating star actor Karan Kundrra these days. Both are often seen giving couple goals to their fans. Fans like the pair of these two very much. Meanwhile, some pictures of Tejashwi Prakash have come to the fore, which are becoming increasingly viral in the Internet world. Actually, Tejashwi Prakash has shared some photos while updating her Instagram account, in which she is seen making a splash at her friend’s wedding with Karan Kundrra. Tejashwi’s style is worth seeing in these photos. Also Read – Makers of Naagin 6 made Urvashi Dholakia’s last day special, Karan Kundrra was also seen at Farewell

Tejashwi Prakash arrives at his friend’s wedding with Karan Kundrra

Sharing these photos, Tejashwi Prakash wrote, ‘My forever gang, my friend’s wedding.’ In these photos, Tejashwi is looking very beautiful in traditional dress. On the other hand, Karan Kundrra’s style is also looking very good. Let us tell you that the fans are showering lots of love on these pictures. Along with this, Tejashwi’s fans are also continuously commenting. It is known that the love story of Tejashwi Prakash and Karan Kundrra started in Bigg Boss 15’s house. During this, both came close to each other, after which Tejashwi and Karan decided to date each other. At the same time, some people believed that this love is only to win the show of Bigg Boss. But these two proved everyone wrong. Tejashwi and Karan are still with each other.

Tejashwi Prakash is seen in this TV show

Let us tell that Tejashwi Prakash is very active on social media and often shares pictures and videos with his fans, which his fans like very much. Tejashwi is spreading her acting skills in Naagin 6 these days. The audience is loving his acting wholeheartedly. Also Read – These TV beauties did not hesitate to become the mother of an older hero, drank bitter sip for career