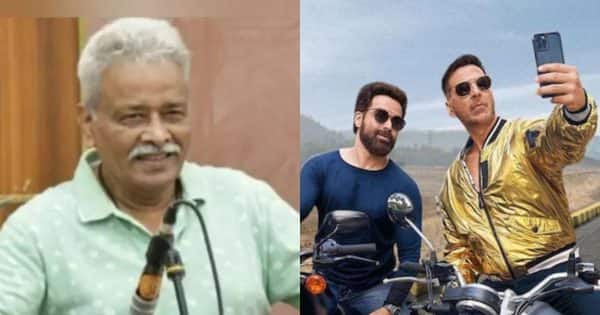 Today Entertainment News: Today many big news has come out from the entertainment industry. Music composer Nirmal Mukherjee has passed away at the age of 72. At the same time, the trailer release date of Akshay Kumar and Emraan Hashmi’s film ‘Selfie’ is out.

Today Entertainment News : Many big news has come out from the entertainment world today. Bad news has come from the Bollywood industry on Thursday. Actually, famous musician Nirmal Mukherjee has passed away at the age of 72. The trailer of Akshay Kumar and Emraan Hashmi’s film ‘Selfie’ will now be released on January 22. A college student misbehaved with South actress Aparna Balamurali, which made her uncomfortable. The video of this incident has surfaced. In this report you will get to read 5 big news. Also Read – Entertainment News of the Day: Yash breaks silence on KGF 3 scenes, Kiccha Sudeep and Ajay Devgan argue over language

Akshay Kumar and Emraan Hashmi’s film ‘Selfie’ is scheduled to release in theaters on February 24, 2023. Recently there was news that the film trailer will be released on January 19 but due to some reason it has been postponed. It is being told in the latest media reports that the trailer of Akshay Kumar and Emraan Hashmi’s film ‘Selfie’ will now be released on January 22. Also Read – Entertainment News of The Day: Akshay apologizes for advertising tobacco, Priyanka-Nick reveals daughter’s name

South actress Aparna Balamurali had reached a college to promote her film ‘Thankum’. During this, a college student misbehaved with her which made her uncomfortable. The video of this incident is becoming increasingly viral on social media. On the other hand, it is seen in the video that no one on the stage expresses any objection to the misbehavior with Aparna Balamurali. Also Read – Entertainment News of The Day: Film to be made on former IPL commissioner Lalit Modi, shooting of Suhana-Khushi-Agastya’s debut film begins

A college student misbehaved with actress Aparna Balamurali during the promotion function of Thangam movie. @Vineeth_Sree I’m surprised about your silence? what the hell #thank you film crew doing there.
@Aparnabala2 #AparnaBalamurali pic.twitter.com/icGvn4wVS8

Priyanka Chopra did a photoshoot with her daughter

Bollywood actress Priyanka Chopra became the mother of a daughter through surrogacy in January 2022. She has turned one year old but she has not shown her face yet. However, she has shared pictures with him many times. Priyanka Chopra has now got a photoshoot done for a magazine, in which she is seen with her daughter Malti Mary. However, the face is not shown this time also.

It has been only 5 years since Bollywood actress Jhanvi Kapoor made her debut in the industry but she has made a very good mark for herself. A news is coming about Jhanvi Kapoor that another film has come in her hand. Media reports are claiming that Jhanvi Kapoor will be seen working with Roshan Mathew in Junglee Pictures’ Uljh. The announcement of this film took place in December 2021.