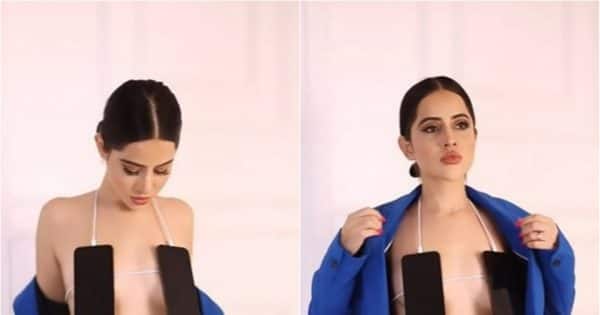 Urfi Javed New Video: Urfi Javed has once again gone topless in front of the camera, whose video she has shared from her Instagram account. In this video, Urfi is wearing a mobile phone on her body.

TV actress Urfi Javed is often in headlines for her unusual style and strange outfits. Urfi Javed has blown people’s senses by wearing a dress made of blood, sometimes with a SIM card. But this time the Bigg Boss OTT fame has crossed all limits. Actually Urfi Javed have hanged mobile phones on their bodies instead of clothes. The video of this colorful outfit has been shared by the actress herself from her Instagram account. In this video, Urfi Javed is seen hanging a phone instead of clothes on her body. Also Read – These stars have crossed every limit to get footage! Accused of being ‘hungry for fame’

in video Urfi is wearing a mobile phone under a blue color coat. In the video, the actress is seen wearing a blazer over the phone worn on her body. Sharing this video, the actress wrote in the caption, “Fully charged.” People are commenting a lot on this video of Urfi Javed and giving their feedback. Also Read – Splitsvilla 14 Promo: Urfi Javed calls herself a ‘cracker’, female contestants will now face tough competition

Actress Urfi Javed started her career in the year 2016 with Sony TV’s show ‘Bade Bhaiya Ki Dulhania’. After this she appeared in Star Plus show ‘Chandra Nandini’. Urfi has also played the character of ‘Aarti’ in the show Meri Durga. But the actress got real recognition through Bigg Boss OTT. Urfi, who was seen in ‘Yeh Rishta Kya Kehlata Hai’, became a part of the first season of Bigg Boss OTT, although the journey of the actress in Bigg Boss house was very short, but during this time she impressed people a lot with her unusual outfit. Was impressed. Now these days Urfi Javed is famous as a fashion icon.