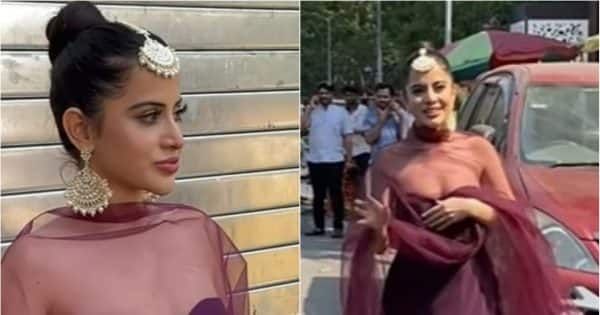 Diwali 2022: Urfi Javed appeared in full clothes on the occasion of Diwali. Everyone was surprised to see such a look of the actress. People are commenting a lot on this look of Urfi Javed.

Urfi Javed On Diwali: Bollywood’s fashion icon Urfi Javed makes a lot of headlines with her unusual outfits. Sometimes, Urfi surprises everyone by wearing a dress made of wire and sometimes a SIM card. But on the occasion of Diwali, Urfi Javed appeared in full clothes, seeing which the fans could not believe their own eyes. A video of Urfi Javed is becoming increasingly viral on the internet. In this video, the actress is seen in maroon color off shoulder anarkali suit. The actress has carried a net dupatta with the suit.

Also with this outfit urfi He has got big earrings of golden color in his ears and a big comment on his forehead. Urfi has got her hair tied. The actress is looking very beautiful in this look. While some people are praising this look of Urfi fiercely, some people are surprised to see the actress wearing full clothes. Commenting on a user wrote, “Who donated clothes on Diwali?” At the same time, another user wrote, “Speak whatever you want, but it is open hearted.”

At the same time, a user advised Urfi Javed to wear full clothes in the cold. The user wrote, “Now winter is coming sister, now if you wear such clothes in cold then you will be sick. Take care of yourself and your body.”

Let us tell you that recently Urfi Javed had got typhoid, the actress herself gave this information. In the video, Urfi is saying, “I had typhoid, I was in the hospital. Now I am a little better than before.” Significantly, Urfi Javed became a part of Karan Johar’s show Bigg Boss OTT. However, even in the first week of the show, she was evicted from the house. However, while living in the Bigg Boss house, the actress attracted a lot of attention with her unusual outfit.