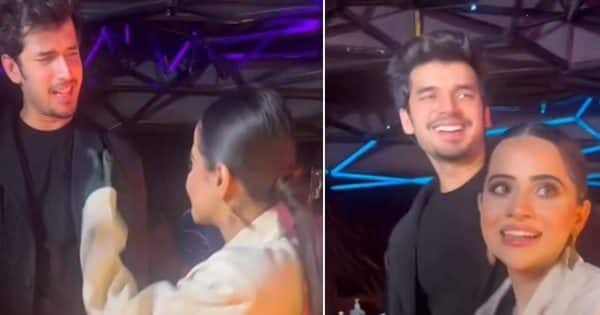 Urfi Javed And Paras Kalnawat Dance Video Viral: A video of Anjali Arora’s birthday party is becoming increasingly viral on the internet. In this video, Urfi Javed is seen dancing on stage with her ex-boyfriend Paras Kalnavat.

Urfi Javed Dance Video: Raw Badam Girl Anjali Arora recently celebrated her 23rd birthday. On this occasion, Anjali gave a party, in which many big TV personalities attended. Industry’s fashion icon Urfi Javed also reached Anjali Arora’s birthday party with her ex-boyfriend Paras Kalnawat. Now a video during the party is becoming increasingly viral on the internet. In this video, Urfi Javed is seen dancing fiercely on the stage with her ex-boyfriend Paras.

in video urfi javed (Urfi Javed Video) and Paras Kalnavat are seen dancing in a tremendous way on the superhit song ‘Saturday Saturday’ from the film ‘Humpty Sharma Ki Dulhania’. It can be seen in the video that Urfi is patched up with his ex, Paras Kalnavat. In this video, where the fashion diva is wearing a cream colored blazer over her green colored short outfit, there Paras He is seen in an all black look. In the video, Paras is wearing a blazer with black T-shirt and pants, which looks very handsome.

Urfi Javed getting trolled over outfit

Urfi Javed is getting trolled for her outfit worn at Anjali Arora’s birthday party. One user wrote, “Whoever donated his jacket, God bless him. You are kind.” So there another user wrote, “Who wears so many clothes after all.”

Not only this, after this video went viral, people also asked Urfi Javed many questions about the patchup with Paras. A user asked in surprise, “Have they patched up?” On the other hand, another user wrote, “This is his ex, he was divorced with boyfriend girlfriend, have they met now or is there a friend zone?”