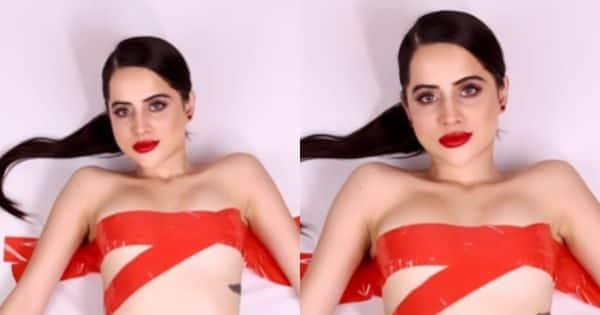 Urfi Javed Video: Urfi Javed has once again shared one of his videos. Urfi Javed is seen topless in this video and social media users are trolling her fiercely.

model and actress Urfi Javed She remains in discussion about her bold videos. Actually, she often attracts people’s attention with her new style of dress. Urfi Javed also gets trolled for her dressing sense but it doesn’t bother her. At times, she puts a lot of class on trolls. At the moment, Urfi Javed is once again in limelight for his new video. This time also she is attracting the attention of people with her dress. Let’s see what Urfi Javed is wearing this time. Also Read – Urfi Javed does not get tired of praising Sunny Leone, said this in the video

Urfi Javed Has shared a video from his Instagram account on Saturday. In this video you can see that she is seen pasting red color tape on her body. The song is playing in the background. In this video of Urfi Javed, fans are very fond of his style and are giving reactions. At the same time, all the social media users are trolling Urfi Javed fiercely. Also Read – Today Entertainment News: Malaika Arora’s show started, Urfi Javed wore key dress

Let us inform that these days Urfi Javed is seen in Sunny Leone’s show ‘Splitsvilla 14’. Here she is attracting people with her work every day. Urfi Javed was seen in the first season of ‘Bigg Boss OTT’. Since then, she had become very much discussed. He has worked in many TV serials.