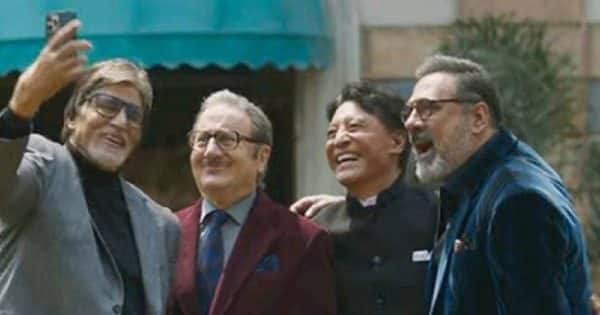 Amitabh Bachchan Uunchai Box Office Collection Day 10: Amitabh Bachchan and Anupam Kher’s film ‘Unchai’ has made a tremendous collection on the second weekend. Know here how much this film has earned in these 10 days.

Unchai Box Office Collection Day 10: Bollywood emperor Amitabh Bachchan, Anupam Kher and Boman Irani starrer film ‘Uunchai Film’ is creating a lot of panic at the box office. The film has earned tremendously on the second weekend as well. Although Ajay Devgan’s film ‘Drishyam 2’ is affecting the collection of Amitabh Bachchan’s ‘Height’. now ‘Height’ The 10-day collection figures are coming out. According to film critic Taran Adarsh, there was an increase in the collection of ‘Height’ on Sunday as compared to Saturday. Also Read – Uunchai Early Estimate Day 9: Amitabh’s film made a strong comeback at the box office, Drishyam 2 could not affect the earnings

did so much collection in 10 days

According to Taran Adarsh, while Unchai collected Rs 2.42 crore on Saturday, the same film collected Rs 2.87 crore on Sunday. According to this Amitabh Bachchan The film has collected Rs 23.62 crore in these 10 days. Let us tell you that ‘Unchai’ had earned Rs 1.88 crores on the opening day, whereas on Saturday i.e. on the second day, there was a 50 percent increase in the film’s earnings and the figure of the film had increased to Rs 3.64 crores. Also Read – Uunchai Box Office Collection Day 8: Amitabh Bachchan’s film flew in the storm of Drishyam 2, just earned this much on the 8th day

Let us inform that actor Danny Denzongpa in Amitabh Bachchan, Anupam Kher and Boman Irani starrer film ‘Unchai’.
Looks like a cameo. Apart from these, Parineeti Chopra and Neena Gupta are also in lead roles in the film. The story of the film is based on the life of three friends who decide to climb Everest to fulfill the last wish of their fourth friend i.e. Danny. During this, Parineeti Chopra, who became a trekking instructor, helps him. The story of this film full of emotions is very much liked by the audience and this is the reason that ‘Unchai’ is creating panic at the box office. Also Read – Uunchai Early Estimate Day 8: Amitabh Bachchan’s film could not survive in front of Drishyam 2, earning so much on the 8th day

On the other hand, on the work front, Amitabh Bachchan was last seen in the film ‘Goodbye’ opposite Rashmika Mandanna, apart from this, Amitabh was also in the lead role in the film ‘Brahmastra’ alongside Ranbir Kapoor and Alia Bhatt.