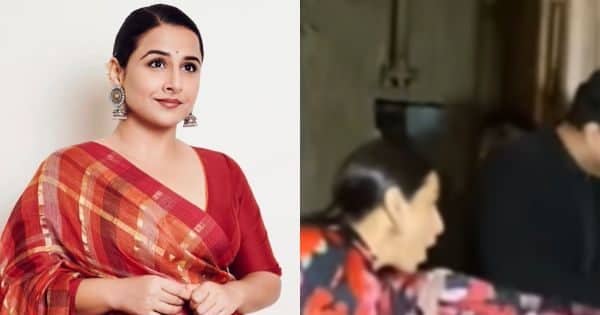 Vidya Balan Oops Moment Video: Bollywood actress Vidya Balan is in discussion these days about one of her videos. This video of him is becoming increasingly viral on social media.

Vidya Balan Video : Bollywood actress Vidya Balan Very active on social media. She keeps sharing photos and videos related to her with her fans. Now a video of Vidya Balan is going viral on social media which has become a topic of discussion among people. Actually, celebrity photographer Viral Bhayani has shared a video from his Instagram account. In this video Vidya Balan is seen with her husband Siddharth Roy Kapur. During this, such an incident happens with Vidya Balan, which she would not have even guessed. Let’s see what is it like in this video. Also Read – Today Entertainment News: Income Tax raids at makers of ‘Pushpa’, complaint filed against Urfi Javed

Vidya balan A video of this has remained in constant discussions on social media. Actually, in this video you can see that Vidya Balan arrived with her husband Siddharth Roy Kapur wearing a saree at the wedding function of Guneet Monga and Sunny Kapoor. During this, the pallu of Vidya Balan’s saree gets stuck in a man’s hand and she was saved by being a victim of an oops moment. Seeing the video, it seems that Siddharth Roy Kapur stops to shake hands with this person. During this, the person also raises his hand to shake hands, then the hand gets stuck in Vidya Balan’s pallu. After this video surfaced, people have started reacting. Also Read – These Bollywood stars do strange tricks to make fame and films a hit, see list

A user has written on Vidya Balan’s video, ‘She has done it intentionally.’ One user has written, ‘That guy was doing handshake with his husband and it is not his fault.’ At the same time, all the users are telling that person as Satish Kaushik. Currently, Vidya Balan’s video is getting mixed reactions. Also Read – Kapil Sharma has made these stars including Ajay Devgn wait for hours, one had started a class