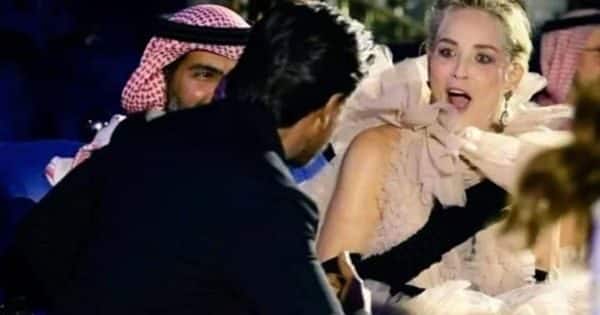 Bollywood actor Shah Rukh Khan The craze is not only in India but across the world. Even his fans include common to special people. The latest example of this has been seen recently. Actually, Shah Rukh Khan appeared in the Red Sea film 2022 of Saudi Arabia. During this, Shah Rukh Khan was honored for his contribution to Indian cinema. Its video is becoming increasingly viral on social media. The interesting thing in this video is that when Shahrukh Khan stood up from his seat, Hollywood actress Sharon Stone’s reaction is about to be seen. Here you can watch the video of Shahrukh Khan. Also Read – Makers of ‘KGF’ and ‘Kantara’ bet on Shah Rukh Khan, will the film break box office records?

Shahrukh Khan A video of is going viral on different platforms of social media. In this video you can see that Shahrukh Khan appeared in Red Sea film 2022 of Saudi Arabia. Then when the host welcomed Shahrukh Khan and stood up, the Hollywood actress sat next to him. Sharon Stone Was completely surprised to see them. Looking at Sharon Stone, you can guess that she could not believe that Shahrukh Khan was in her midst. After this, she was seen clapping happily, then did namaste to Shahrukh Khan to Sharon Stone. Also Read – Today Entertainment News: South actor KS Premkumar passes away, Urfi Javed’s new video goes viral

On the work front, Shah Rukh Khan will be seen working in the films ‘Pathan’, ‘Jawan’ and ‘Danki’. The film ‘Pathan’ will release in January, 2023, the film ‘Jawan’ in June, 2023 and the film ‘Danki’ in December, 2023. Let’s tell that Shah Rukh Khan was last seen in the film ‘Zero’ released in the year 2018 with Katrina Kaif and Anushka Sharma. In this way Shah Rukh Khan will be seen on the big screen after five years. However, he is seen doing cameos in many films. Also Read – Shahrukh Khan and Priyanka Chopra seen under one roof after years, photos rocked the internet